There are few things more satisfying than picking up a brand new snowboard.

Just think of all the sweet, snowy adventures the two of you will have together! New snowboards don’t come cheap, however, and if you want to protect your investment and get as much riding as possible out of your new stick, you’re going to have to baby it a little.

Proper maintenance is the key to keeping your board in tip-top shape—and for maximizing your level of stoke on the mountain. Here’s what you need to know.

Snowboards typically come with a “factory wax", meaning a wax that was applied in the warehouse when it was made. You can ride the board immediately with the factory wax, but most snowboarders agree that it’s way better to give the board a proper hot wax before you take it out on the snow.

Waxing your snowboard is surprisingly easy. It will keep you moving faster (which is essential on those flat bits or cat tracks) and will prevent your board from drying out, thus extending its life.

To wax a snowboard, you need some wax, an iron, and a scraper. They sell special irons for waxing skis and snowboards, but any old iron will do—just be sure NOT to use it for clothing ever again, and designate it your wax iron. Different types of wax are better suited to different conditions. More on waxing in a moment.

Aside from waxing, you might want to detune the nose and tail ends of your snowboard. Some snowboards come with super sharps metal edges along either ends—but since you won’t actually be turning on these edges, it’s good to buff them out to prevent catching an edge. To do so, pick up a file, a diamond stone, and a gummy stone, and look up a video to get the technique down pat. If you’d rather not take tools to your board, most snowboard shops can do this for you.

Wax On, Wax Off

Waxing isn’t a one-and-she’s-done kind of thing—you’ll need to give your board a good hot wax from time to time. Exactly how often will depend on how much you ride it, but a sure sign that it’s due for a wax is if the base starts to look a little white and you feel like you’re going slower than usual on flat bits.

You can pay to get a hot wax done in a shop, but it’s much cheaper to learn to do it yourself. Watch a few YouTube videos to see how it’s done, and don’t be afraid to give it a try. If you mess up, you can just add more wax and try again.

If it’s the morning of a pow day and you realize your board could use a wax, rub a block of wax (cold) against the base—it’s kind of like coloring with a crayon. It’s not as effective as a hot wax, but it’ll give you just enough of a boost to help you through the day. 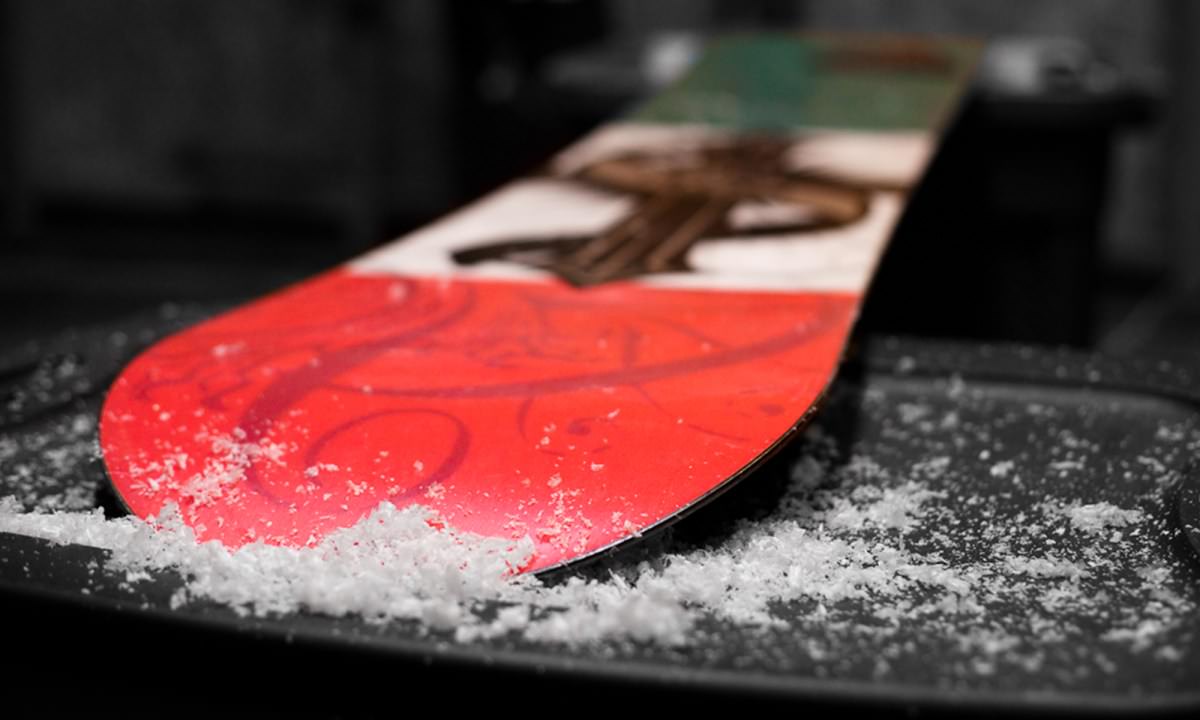 Exposed rocks and other hard, jagged surfaces are your snowboard’s worst enemy. Ride with care, especially early and late in the season when the coverage isn’t at its best. Resist the temptation to ski out in marginal conditions, and pay attention to signage that warns of questionable snow conditions.

It happens to the best of snowboarders—an unexpected run in with a rock causes a bit of damage to the base of your board. If the scratch is relatively shallow, buff it out with a fresh hot wax and you’ll be good to go. If it’s a little deeper, you’ll want to get this fixed sooner rather than later. You can get it repaired at a snowboard shop or you can fix it yourself with a P-Tex candle.

Core shots—deep gauges that penetrate past the laminate layers—require a little more elbow grease. It’s still possible to fix it yourself, but you’ll want to read a detailed guide for that.

At the end of each and every day on the mountain, be sure to carefully wipe off any snow that’s stuck to your board. Don’t forget the crevices around the bindings; leaving excess moisture can cause metal parts to rust.

At the end of the season, give your board a solid wipe down (especially if it’s covered in spring riding muck), dry it off thoroughly, and melt on a thick layer of wax—which you can scrape off at the start of next season. Store your board in a dry, cool place where it won’t get knocked around.

Remove Product?
Are you sure you want to remove the following product from the cart?